Awakening the Dreamer: an experience 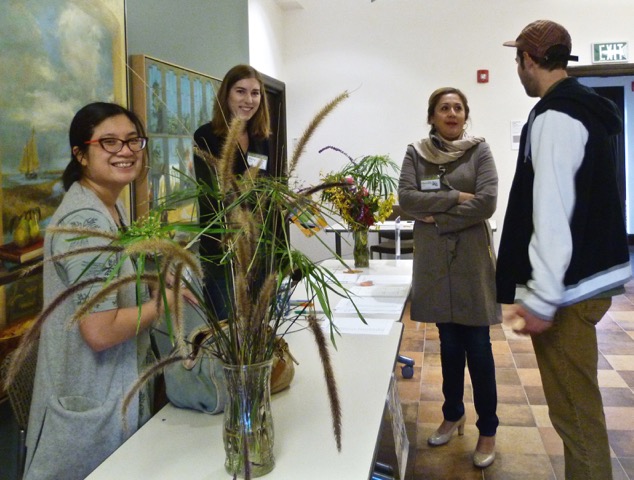 Me on the left

In the middle of the milling exercise, I stopped, as requested, and observed, without speaking, the woman in front of me. She was middle-aged, with black-rimmed glasses, and a smile that appeared hesitantly, disappeared, and then came again, wider this time. She observed me as I observed her. Although we had been introducing ourselves to different people all throughout the symposium, especially seeking out people we didn’t know to form groups with or talk with, I had not met her yet. At the end of the observation time, we were released to walk around again, but this time instead of hurriedly running around as if we were late for a meeting, work, a very important date, we slowed down, walked purposefully, meditatively. And then we stopped in front of another person, and again, without speaking, observed the person—in front of us. We smiled at each other, and then I watched the muscles on his face, a play of emotion that to my children, who cannot naturally read facial expressions, would have been a mystery—but I was able to understand the privilege of watching a stranger—no, a fellow human—feel emotions that must be so similar to mine, as his eyes watered, and tears came as he blinked, deliberately, in the moment. When it came time to move on and end the exercise, we gave each other a hug.

“It sounds like some hippy dippy thing with reading crystals,” my husband had told me, when I first showed him the Awakening the Dreamer Symposium flyer. And try as I might, even though it had been explained to me, and I had talked about it to friends, community members, and even invited the local City Council to attend, I couldn’t shake that impression myself. But I knew that Sustainable Solano was as concrete and active of a group as I’ve ever seen—full of drive and ideas, but also with the planning, organization, and execution. They weren’t about dreams. They made reality.
And yet, when Tracy Apple of Pachamama, who had originally developed the symposium over a decade ago, asked anyone who wasn’t sure what they were getting into to raise their hand, I, and about half the people there raised their hand.

“We came because after the election, we felt that we just had to do something,” a couple who had recently moved to the county told me when I asked why they had come. “I love Elena, and she asked me to come,” said another woman, “But I have no idea what she’s gotten me into.” “Our friend went to a symposium somewhere else and he said it was life-changing, that we needed to go so when we saw one in Solano County, we came,” said a group of three. “I’m a minister,” yet another attendee said, “I am really interested in interconnectedness and learning about how we can increase that in society.” “I am really into social justice. Have dedicated the last two decades of my career to it,” said another attendee. “I just walked by the street, and I’m a first world person, very concerned about the pipeline, and I wanted to see what this was about.”  “I’m from Vallejo, and I didn’t expect to see anyone else from Vallejo here, but there are a lot!” a woman said. “I’m so excited and hoping to be able to form a community.” 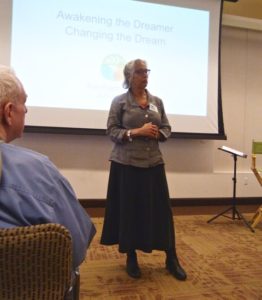 “We are here,” Tracy and her co-presenter Josh, said, “To give you the facts from experts in their field about the state of the world today, discuss how it got there, where it is going on its current trajectory, and how to change it.” Through a series of film presentations, lectures, guided group discussions, guided personal meditations, and exercises, they did just that. As many attendees said, it wasn’t any information that they didn’t already know about the destruction of the environment, about income inequality and social injustice, but this was different in that they were allowed to sit with their feelings, be guided through the overwhelming information and despair, the inaction and feeling of, “What can one person do?”, and led to examine their own unspoken assumptions of how things worked, explore what were their own passions, how it had informed their lives up until now, and how it might shape their lives in the future—to create small, committed actions—within a community that supported and bolstered them—with the goal of stopping nothing short of changing the world.

People committed to concrete actions long and short term, from recycling, wrapping presents in newspaper, finding a socially conscious holiday gift list, to researching how to start a sustainable elementary school, joining a local non-profit organization, to committing to go home and spending more time with children and grandchildren.

After the milling exercise, which was the final exercise and presentation of the symposium, we stood hand in hand in a very large circle of almost 70 people. In my everyday life, even as my children cling to me every moment of the day, standing there holding another’s hand, I was astounded that the touch of palm to palm in had become so scarce. Everyone was asked to share a single word: energized, thankful, connected, love, alive, hopeful, peaceful, grateful, happy, community, connected.

“The Awakening the Symposium isn’t ending,” said Tracy as everyone broke off, naturally forming into groups by city or interest to prolong the experience.  “It begins now.”

This was Nam’s experience. What was yours? Share your stories at info@sustainablesolano.org