A Blueprint for a Better World 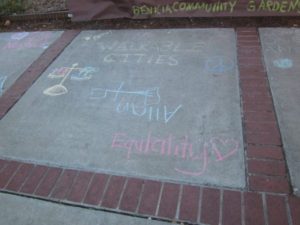 Every Thursday night from April through October, those in search of a healthier meal or a greener lifestyle have prowled the booths and stalls of Benicia’s Farmer’s Market, home to everything from organic dinosaur kale and farmstead cheeses to solar panel installation. On July 22, those visitors gave something back: a recipe for a better world, written in bold strokes of colored chalk outside Benicia’s community garden.

For a few brief hours, couples, families, seniors and teens on their way to and from the market paused to answer the question: “What would a world that worked for everyone look like?”

Not a single visitor mentioned a political candidate, despite the event falling squarely between the Republican and Democratic national conventions. Instead, the responses ranged from the general – “No Cars,” “No Guns,” “People and the Environment on Equal Ground” – to the specific: “Paid Maternity Leave,” “Healthcare for All,” “Walkable Cities.”

“It was the adults, mostly older ones, who added the very specific notes,” said Nam Nguyen, the communications committee volunteer who coordinated the event. “The teenagers had the big ideas. And at the center of the matter, it was the young kids who knew what makes a world work for everyone: love.”

With the exception of one contributor – who wrote “Clean Water for All” across a section of sidewalk – few of the comments gleaned from the market’s visitors discussed community-supported agriculture, the establishment of a local food web, or any of the other initiatives BCG is supporting.

Instead, said Executive Director Elena Karoulina, those ideas written in chalk provide an idea of what “sustainability” really means to the people of Solano County – an inspiration and a framework for the organizations’s future endeavors.

“What gives me a lot of hope is that people did not jump into ‘solar panels’ and ‘conserve water,’ but talked about tolerance and love instead,” Karoulina said. “I see that universal respect and reverence for our own humanity as a root of sustainability. Without this foundation to our work, all our sustainability efforts – practical, measurable programs – would be in vain.”

Of course, not every sidewalk suggestion will become part of the organization’s mandate. Many contributors only wrote their names, while one wrote “meow” – a suggestion, perhaps, that the world might be more workable if everyone adopted a cat.

Perhaps the evening’s most positive comment came from the first visitor to answer the question.