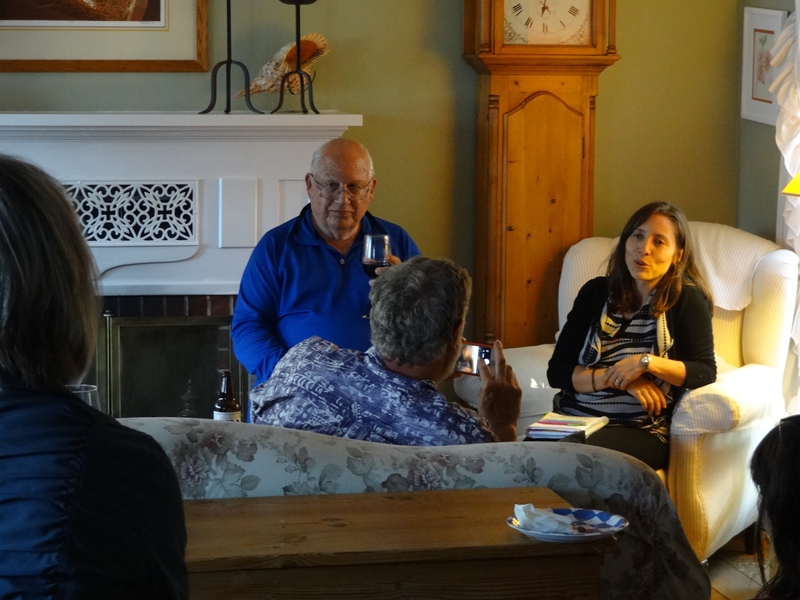 A conversation sparked in a Vallejo living room by the lessons learned in the city of Bogota, Colombia, could be a part of driving change in the local community.

Change starts with a vision of what is possible.

“It is a fire in our hearts,” said Anamaria Aristizabal, who spoke to a small group of local citizens earlier this summer about the transformation that took place in her hometown, creating a city full of parks, libraries and bike paths. Anamaria was there by invitation of filmmaker John de Graaf. (We’ll be showing one of his films, Redefining Prosperity, on Aug. 18 in Benicia, and John will participate in a Q&A after the screening.) John is currently working on a documentary about Vallejo. He said there are lines to be drawn between what happened in Bogota and what he sees happening in our local city — how bringing public services to neglected areas can give residents the sense that someone in government cares and the empowerment to ask for more.

Anamaria, who is a public speaker, author and the co-founder of an ecovillage outside of Bogota, drew out a timeline of how Bogota’s leadership history led to the city’s current state. First, there was leadership that pursued fiscal cleanup of a corrupt and bankrupt system. That paved the way for the next leader to focus on civic culture and the need for citizens to be civil to each other while building up a fiscal surplus. And that surplus allowed the next leader to focus on infrastructure, building out all of those public services and spaces.

By solving for essential needs, such as adding communal kitchens to address hunger, the city freed people up to have the bigger conversations and to advocate for more and better ways of improving the city and the status of its citizens.

“A strong social platform of people feeling met by their government allowed the city to move into a new era,” she said.

In examining the identity of an individual or a city, it comes down to tangible things, stories (those “seeds” that carry the identity and essence of a person or place) and ideals, Anamaria said. In Bogota, attention to ideals meant a focus on inclusion for all citizens or beauty in the natural world.

“All these ideals guide us and bring us together,” she said.

A focus on ideals can be a challenge, with the question of how to sustain the commitment and energy around an ideal.

She pointed to the small group gathered together and how it creates new connections. There are more opportunities to do that within our communities. Part of the discussion that night among attendees touched on the need to better engage disenfranchised parts of the community.

“Out of relationships you can generate new possibilities and move into action,” she said, noting that the building of relationships, purpose and meaning has to come first before jumping to action.

She hoped that by sharing what has happened elsewhere, she can inspire others intent on changing their cities for the better.

“Sharing the positive stories that are already happening becomes the good fire to inspire others,” she said.

Anamaria’s insight and the feedback from this small group on the importance of community involvement and lending an ear to the voices of those most affected by community challenges ties in with Sustainable Solano’s commitment to creating Listening Circles. Learn more about this exciting process here.