As we looked in Vacaville, Fairfield and Suisun City for neighborhoods that could benefit from mitigation efforts to address pollution, we focused on several variables that showed where the pollution hazards were and how the local population might be vulnerable to pollution. 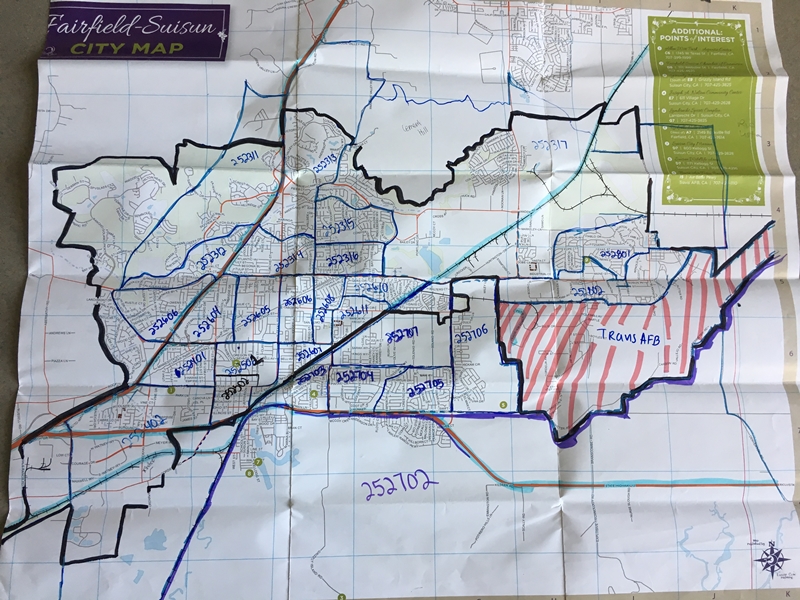 We looked at data from the census tracts in each city

For this analysis, we relied on data collected from the California Communities Environmental Health Screening Tool combined with our review of how many of these variables showed up at high levels. This insight was used to find large census tracts and then narrow them down with guidance from UC Davis to identify potential neighborhoods that could benefit from programs that bring in trees and plants for better air quality, water-collecting landscape features that mitigate stormwater runoff and projects that build community capacity to address the effects of pollution.

Why was it important to weigh not only environmental but also socioeconomic challenges to select these neighborhoods? Because research shows that those areas that have socioeconomic barriers and sensitive populations are at higher risk or more likely to suffer more pronounced effects of environmental pollution.

Below are some of the terms we relied on in our evaluation and in the attached chart. The percentiles in the state’s data and our chart are based on a comparison of these variables as measured from multiple sources and for multiple statistics for each census tract against the state as a whole. For more in-depth description of how each percentile was calculated, view this report.

(where people come into direct contact with the pollutant)

Pesticide Use — Pesticide exposure often comes from pesticides drifting out from agricultural fields or in the air from volatile chemicals. Pesticide risk most often falls on predominantly farm worker communities around agricultural fields that produce plants or animals. Chronic disease and cancer have been associated with pesticide exposure. While pesticides are also used on parks, golf courses, cemeteries and around businesses, such uses were not measured for this variable. This variable measures use of specific hazardous and volatile pesticide ingredients, since there is not statewide data on pesticide exposure.

Toxic Releases from Facilities — Toxic releases can come from hazardous pollutants being released to the air, water and land or injected underground and could be a factor in chronic health risks. Communities near industrial facilities can be exposed to routine and accidental releases, and low-income, disadvantaged and communities of color are often more likely to be in areas with higher toxic releases. This variable measures chemical releases to the air from facilities and from waste incineration, since there is not statewide data on toxic release exposure.

Traffic Density — In urban areas, more than 50% of particulate emissions come from traffic, and vehicle exhaust contains toxic chemicals, such as nitrogen oxides, carbon monoxide and benzine. Exposure to these emissions can cause heart and lung disease, cancer and increased mortality, while major roadways can also increase noise, vibration and injuries in communities. People of color and low-income residents make up the majority of residents in high-traffic areas. This variable looked at traffic volumes and road length within 150 meters (about 500 feet) of each census tract to determine density.

(where pollutants have negatively affected the environment)

Cleanup Sites — These sites have hazardous substances present that are being addressed through cleanup efforts. In addition to environmental degradation, health concerns about these sites focuses on people coming in contact with the substances if they move off-site through the air or groundwater. This variable used a formula based on the different types of sites, their cleanup status and how near they were to populated areas.

Groundwater Threats — Storage and disposal or hazardous materials above or underground at commercial, industrial and military sites can threaten groundwater quality. Common pollutants from leaking underground storage tanks and cleanup sites include gasoline and diesel fuel; chlorinated solvents and other volatile organic compounds, heavy metals such as lead, chromium and arsenic; pesticides and perchlorate. This variable used a formula based on the type of site, cleanup status and how near they were to populated areas.

Hazardous Waste — Threats can come from both hazardous waste generation, which can include manufacturing by-products, used oil and contaminated soil from cleanup sites, and discarded materials, such as cleaning fluids or pesticides, as well as the off-site facilities that handle recycling, treatment, storage and disposal. Communities most affected by these facilities are ethnic minority and working-class populations near industrial areas. This variable measures hazardous waste facilities and generators.

Impaired Water Bodies — Pollutants can contaminate streams, rivers and lakes, affecting their uses for the plant and animal species that live in and around those bodies of water and for human use, such as drinking, swimming and fishing. Pollutants can come from toxic substances, but also physical contaminants like weeds or trash. This variable measures the number of pollutants found in impaired water bodies within the census tract.

Solid Waste Sites and Facilities — New solid waste landfills are often designed to prevent contamination, but older or illegal sites can damage the environment and increase exposure risk. Composting, treatment and recycling facilities can raise concerns about odors, pests and increased truck traffic. Community effects can range from odors to the release of gases like methane and carbon dioxide to the leaching of toxic materials into the soil. This variable looks at the solid waste sites and facilities, since there is not data on the environmental effects of such facilities.

(populations that are more physically vulnerable to pollutants)

Asthma — Traffic and outdoor pollutants can trigger asthma attacks, which cause breathlessness, wheezing, coughing and chest tightness. Having asthma makes people more sensitive to air pollution, and some pollutants have been linked as a cause of asthma. Children, the elderly and low-income populations have disproportionately higher rates of asthma. This variable looked at emergency department visits for asthma.

Cardiovascular Disease — Cardiovascular disease involves blocked or narrowed blood vessels that can lead to heart attack and other problems. People with heart disease are more likely to be at-risk from short- and long-term exposure to air pollution. Those who have heart attacks are at higher risk of dying if they have been exposed to increased air pollution. This variable looked at emergency department visits for heart attacks.

Low Birth-Weight Infants — Low birth weight is linked to infant mortality and increased risk for later health problems that increase sensitivity to pollutants. There are suggested links between environmental pollutants, such as lead, air pollution, toxic air contaminants, traffic pollution, pesticides and polychlorinated biphenyls, and low birth weight. This variable is based on the percent of low birth-weight infants.

(factors that can make a community more vulnerable to pollutants)

Educational Attainment — How much education someone has can be a measure of socioeconomic status, but more education is also tied to better heath outcomes and less exposure to environmental pollutants. This variable looked at the percent of the population over age 25 that did not have a high school education.

Housing-Burdened, Low-Income Households — Low-income and financially vulnerable households with high housing costs can be negatively affected when it comes to health. This variable measured the percent of households that were both low-income and severely burdened by housing costs, which meant they paid more than half of their income on housing costs.

Poverty — Wealth can influence health by determining living conditions, nutrition, occupation and access to healthcare, and poor populations are more likely to have negative health outcomes when exposed to environmental pollution. This variable measured the percent of the population living two times below the federal poverty level.

Unemployment — High unemployment can translate to low socioeconomic status and can mean poor health. This population is more likely to live in neighborhoods with higher levels of pollution and environmental concerns. This variable measured the percent of the population over the age of 16 that is eligible to work but unemployed. Students, retirees, homemakers, those in institutions, active-duty military and those not looking for work were not counted.

Here are some other data resources that address local populations.

The Cal EPA database of disadvantaged communities, which maps communities under SB535.

The Air Resources Board’s disadvantaged and low-income communities map as defined by AB 1550.

The Parks for All Californians community map.