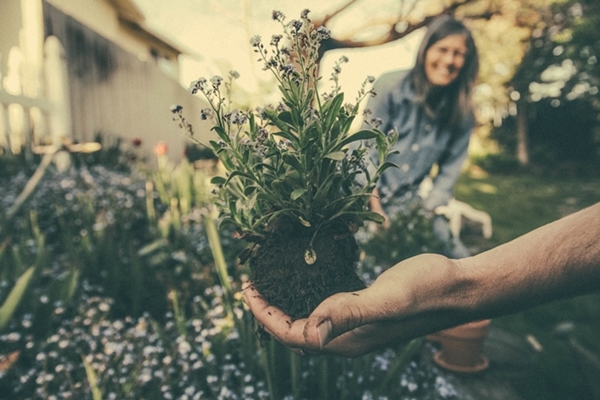 In partnership with Solano-Napa Habitat for Humanity and Community Action North Bay (CAN-B), this garden will provide food for at least six veterans. The goal is not only to provide nutritious, good-quality produce, but also to provide a quiet and calm activity and environment where veterans can live and thrive.

While most of our programs are a combination of in-ground perennial plants, including fruit trees, vines, etc., for this project we were only able to include annual vegetables due to complications with the current landscape. For this project, Habitat for Humanity partnered with Home Depot to build two ADA accessible raised beds. Our champion at this garden was so enthusiastic that he also took it upon himself to do some container planting.

This garden was installed by our garden champion, Maurice, who was part of the process every step of the way. He took it upon himself to fill the raised beds, to plant all of the vegetable starts and to start seeds that he had collected over the years. While we also included drip irrigation for the raised beds, Maurice was excited about irrigating them by hand early in the morning “before the day got hot.” He is also excited about sharing the produce with his housemates and neighbors.

This innovative project is so exciting because it has the potential to serve as a prototype for other potential projects in Solano County.

The Dixon Veterans Home can house up to eight residents. Thanks to this garden, each one of these residents will have the ability to eat fresh, good-quality produce from their very own backyard. While we were unable to plant in-ground due to limitations with the site, through the support of Habitat for Humanity and their partnership with Home Depot, we were able to build two elevated raised beds that are ADA compliant. This was an effort to increase accessibility to gardening for all veterans (current and future). We are unable to track the yield of this garden at maturity, due to a different number of factors such as type of plant, number of plants, etc.

Using biointensive planting methods and container gardening, this planting season, the Dixon Veterans Home garden will create at least 20 pounds of food, which is about 16.6 meals.

When it comes to collaborating with more than one organization, it is important to have all organizations be part of the initial steps, in this case with both Solano-Napa Habitat for Humanity and Community Action North Bay (CAN-B). While we began the project under the guidance of Habitat for Humanity, we finalized the installation with the support from CAN-B.

When it comes to engagement of the residents, there was a lack of interest from some of them. We were lucky that we had found a champion in Maurice, a resident who loves growing food and who was interested in having a garden since the beginning. Although we decided to place the raised bed at the side of the house due to easier access to a water source, a better idea would have been to place the raised beds closer to the main gathering area to pique the interest of other residents who might not have initially been interested in gardening.

For projects such as this, I would also recommend connecting with the architect in charge of designing the house. This can allow for a planned, more sustainable approach to the landscape.

As always, a strong champion passionate about growing food is such an asset to gardening project. This garden was successfully installed in record time thanks to the garden champion’s hard work and determination!