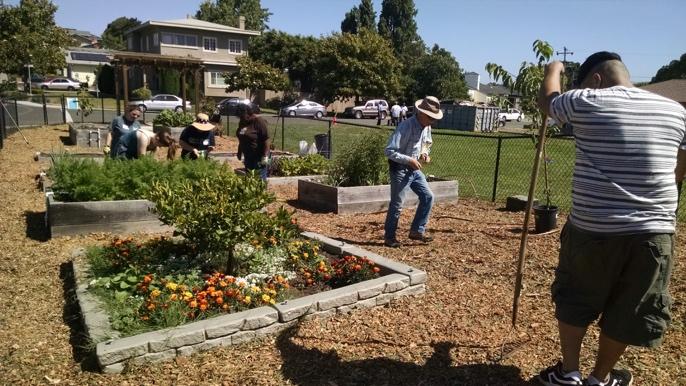 For this installation there were 25 participants.  Installation participants included members from Emmanuel Temple, Genesis House and community members. This site had nine raised beds and a grassy area. This area already had two church congregation members who take care of the garden on a weekly basis. As part of the revitalization of the garden, we sheet-mulched the garden area in an effort to help decrease the amount of work that the garden caretakers will have to do, such as cutting grass. The irrigation valves found on-site were leaking, so the irrigation valve was replaced. Fruit trees were also added and vegetable vines that will climb the fence structure were planted in order to maximize food production in the site. Prior to installation two raised beds were emptied, so vegetables and fruit starters were planted in the raised beds.

In order to ensure people were engaged with the process and aware of the installation, community members were engaged several times during the bi-monthly fruits and veggies giveaway and the weekly food and clothing giveaway that the church has. Members of the congregation were also engaged before their weekly Sunday service and encouraged to ask questions or concerns after church. As part of the outreach, we collected ideas for fruits and vegetables that the community would like to see planted. Since a lot of people were Spanish speaking only, these lists were collected in English and Spanish.

The produce grown in this garden is given away during the food drives and used for meals cooked for community members and the congregation. Emmanuel Arms Inc., the service arm of the church, hosts a variety of community events through the year, in an effort to build mutually beneficial relationships within the community which it serves.

Over the next five years this garden will create at least 517 pounds of food, which is about 476 meals.

Churches that have pantries on-site would benefit a lot from having also having a garden on-site, ensuring that community members who participate in their food giveaways have access to fresh and organic produce. However, maintenance is one of the main concerns when it comes to converting an area into a garden. When faced with this, it might be a good idea to find community members or groups who would like to support with the maintenance, planting and harvesting of the garden. This could be an opportunity to find people who are like-minded or might be retired with spare time to give back to the community.

Engaging members who are already involved in the church and asking them how you can best support a garden effort is important. In the case of the church, there were two community members already taking care of the garden, so it was imperative that we get to know them and see how we can make their job easier (in this case it was taking the grass out). An approach such as this allows for them to keep ownership of the garden.

Churches were also concerns with long and complex contractual agreements. Because of that, those looking to work with a church should provide a more simplified version of this document.

Lastly, churches in urban settings might not have space to plant things and grow produce. Because of that, those wanting to put a garden in a church should find different and creative ways of growing food, such as using already existing structures (like a fence) to grow produce vertically. Additionally, sometimes the most impact can occur when you can bring new life to an existing garden that is struggling.

Read more about this project in the article below. 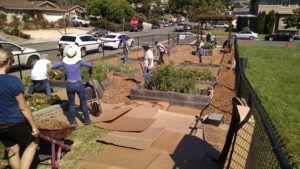