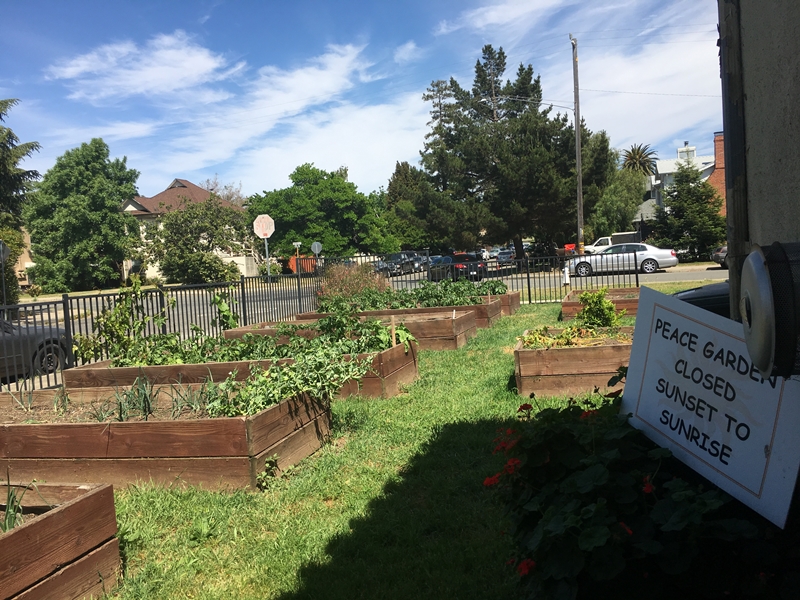 First Christian Church of Vallejo’s mission encompasses a desire for justice, a focus on alleviating poverty and hunger, and attention to being good stewards of the Earth. The church has a number of mission action efforts, including Global Holiday Faire, CROP Hunger Walk, Relay for Life, Common Ground, Green Chalice and the Johnson Ranch Garden.

This project was initially scheduled to be installed by members of First Christian Church’s congregation and the public following our educational, hands-on workshop model. However, due to concerns with the pandemic, this garden was installed by Solano Gardens’ lead designer Scott Dodson with support from a few First Christian Church members (all while following safe distancing protocols).

The Johnson Ranch Garden initially consisted of eight raised beds, one small fruit tree and one young grape in a grassy area. Irrigation was not set up to any part of the garden; thus, all watering was done by hand. As part of the revitalization of the garden, we sheet-mulched the garden area, installed working irrigation to all the raised beds and the already planted grapevine. In an effort to include more perennial plants that will produce food for more than one year, two of the raised beds that were not used as much (according to the garden committee we worked with) were removed and we planted three fruit tree guilds. To maximize the space, a few kiwi plants were included in the design next to the fence. This fence will serve as the support structure for the kiwi vines. A swale was also added to the site to capture roof water during the rainy season. This swale will slow, spread, and sink roof water, and irrigate all the fruit trees and in-ground plants.

Prior to the installation we held two meetings, one in person (pre-COVID-19) and one virtual one. During these meetings, we explained the concept of permaculture, got ideas for the design, talked about community wants and problems with the garden and collected a plant list based on input from the congregation since they know the donation sites and who will be eating the produce from these gardens.

The produce grown in this garden is given away to different food donation sites throughout Vallejo including: Faith Food Fridays, The Sparrow Project, and the Amador St. Hope Center.

Over the next five years this garden will create at least 415.2 pounds of food, which is about 346 meals.

Feeding the community is something that a lot of churches play a central role in, whether as distribution sites or as garden sites. Churches interested in having a garden will more likely than not already have a garden on-site. However, they often have limited resources to make needed repairs to the garden, such as fixing or adding irrigation where it’s needed. That is where additional resources/donations can have a huge impact, to ensure that the gardens and caretakers have what they need to increase the food production and overall success of the garden.

As always, it is a good idea to be creative when working in urban spaces, including using already existing structures (like a fence) to grow produce vertically, since sometimes the most impact can occur when you can bring new life to an existing garden that already has a network of people it serves.