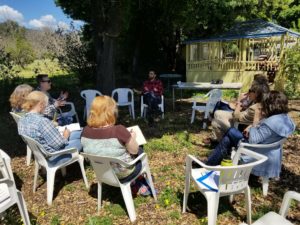 On a sunny Saturday morning, a group of local community members gathered at Morningsun Farm in Vacaville to have a conversation with a Food and Farm Attorney Neil Thapar from the Sustainable Economies Law Center.

In the beginning, Neil painted a grim picture of the state of our national food system. We produce a lot of food and throw away 40% of it, while the rate of hunger is going up each year. For example, studies show that one in four kids is going hungry in our county. Diet-related diseases are also on a rise, so all we have to show for our latest “advancements” in agriculture and food production is the excess of food and decreased food security and community’ well-being.

Neil focused on the three major components of production: land, labor, and capital, and shared with us the staggering examples of the increasing level of consolidation of ownership in agriculture, food industries and land use. Our food system, from field to table, is being concentrated in just a handful of companies.

Then Neil introduced a concept of commons. The commons is the cultural and natural resources accessible to all members of a society, including natural materials such as air, water, and a habitable earth. These resources are held in common, not owned privately (Wikipedia). He talked a little bit about an American economist Elinor Ostrom, the first and only woman to receive a Nobel Prize in Economic Science for her work defining principles of the commons.

We discussed how some of the industries can be organized based on cooperation and community control and looked closely to the following examples:

All these efforts are in the early stages of development and none of them are in our area. We, at Sustainable Solano, are working on envisioning and implementing some of these ideas in our county, but it will take time and dedicated effort.

Meanwhile, there are other ways to support this “new” emerging world of commons:

Short-term: Learn about history of native people in your area, how US policies displace them, and how that relates and influences your local food system.

Short-term: Increase your spending at cooperatives by a definite amount over the next 6 month (and help take “Cultivate Community Food Co-op off the ground).

Long-term: Convert your business, or suggest conversion, to a worker-owned cooperative

Long-term: Redirect a significant amount of your investments into locally owned businesses or cooperatives.