Urgent message from the leaders of 11 indigenous nations in Ecuador 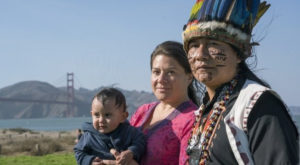 “The accelerated destruction of the sacred headwaters of the Amazon in Ecuador and Peru alone will disrupt the entire Earth’s distribution of rain.”

As leaders of the Sapara people, part of the confederation of 11 indigenous nations of the Ecuadoran Amazon living in harmony with nature in the most biologically diverse terrestrial ecosystem on Earth, we have made the long trek to the Global Climate Action Summit in San Francisco for reasons that may surprise Americans and other natives of highly developed countries.

Most citizens know by now that climate change has gone beyond the threat of disrupting the delicate balance and interconnection among the nearly 4 million species of plants and animals in the Amazon (one-third of all species on Earth).

Most know that the ecology of the vast Amazon rain forest is being jeopardized by flagrant, irresponsible, and visionless drilling, logging, mining, and the slash-and-burn clearing of thousands of acres of pristine forest each day. Imagine the overwhelming sight if every tree and bush between San Francisco and San Mateo were leveled today. And then between San Mateo and Palo Alto tomorrow. And then on to Cupertino the day after. Some know that illegal and immoral disrespect for both our land and culture moves entire indigenous nations closer to extinction, along with the ancient knowledge base that our remaining elders possess.

That is our reality, but we did not come to California to ask to be saved.

The real reason we have made the 30-hour journey by foot and canoe, small propeller plane, and bus, and then international flight from our capital, Quito, to San Francisco is to deliver an urgent message to the chiefs of industry, the policymakers, and to citizens who are caught in the trance of short-term consumption: The hectic pursuit of material gain is not sustainable.

The accelerated destruction of the sacred headwaters of the Amazon in Ecuador and Peru alone, a 60-million-acre area more than half the size of California, will disrupt the entire Earth’s distribution of rain. Two and a half acres of our forest contains more species of trees than are found in the entire United States. The rivers within the clouds above our forests are larger and mightier than the Amazon River itself. They drive the planetary weather system and replenish the Earth’s cycle of fresh water. Which means the fresh water that comes out of your faucet — and the long hot showers you enjoy each morning in America or Europe or Asia — are in jeopardy.

We are here to plead with you to see that our survival is yours too.

As guardians of the Amazon for thousands of years, we know intuitively when danger is near. Our belief system is based on what our ancestors observed in the natural world. Predating Western civilization, our ancestors identified the energies and powers in all living things as spirits. As you may go to church or temple or mosques to connect with your deity, we grow up listening to the messages that come from our symphony of trees and plants, the oldest and most original species still living on Earth.

We observe the transformation of animal life, the habits of our birds, the migration of our insects, the power in our waterfalls, and the voices from our caves. Our spiritual tools for knowing are antecedents to western philosophy and scientific enquiry, and the core curricula of epistemology.

Our culture does not know the dream of the individual, the single person. We have never lived with the dream of the self-made man. We only know a world of symbiotic coexistence, one universe, and shared perpetual interconnectivity. And that is what we wish to share, considering the destruction of the headwaters of the Amazon and the “aerial rivers” of vapor will affect both the residents of your Fisherman’s Wharf and our Sapara community of Naku.

We are the parents of a beautiful 11-month-old boy named Tsamaraw, which means “neutral energy” in our Sapara language, which itself is nearing extinction. Tsamaraw’s future is intricately connected with the lives your babies also can expect. We come to San Francisco as an act of love for all the babies.

We come to add the indigenous voice to the plethora of voices that need to be heard, the politicians, the economists, the entrepreneurs, the scientists, the Pachamama Alliance members, and even the skeptics.

Our country has a painful history of industrial pollution with toxic waste of oil extraction entering our water table, provoking the rise of cancer, and contaminating the plants we use for food and for medicine, many of which contain the very source of medicines that international pharmaceutical companies have used to manufacture profitable and life-saving treatments and cures. And most of that oil from our Amazon is exported to refineries in California also polluting your communities. But we don’t come to blame or to point fingers.

We’ll be in San Francisco to listen to all the others. We’ll listen to the corporations and mining and oil companies, the loggers and the climate deniers, but please listen to the message we bring from the heart of the planet’s hydrological system.

On behalf of the 1,000 remaining Sapara, the 16,000 Achuar, and the 150,000 other indigenous people in the sacred headwaters of the Amazon, we will be in San Francisco to embrace all living souls, to share a life-affirming message direct from our collective heart, and to invite you to exit from a trance of reckless development and consumption. That trance forgets that the world we pass on to our son, Tsamaraw, and to your children, and theirs, embodies the future that we would want to be remembered for, one that is guided by Nature from which we come and to which we belong.

We are in San Francisco to help you change the dream of the modern world.

Manari Ushigua, a shaman, is a leader of the Sapara Nation. Belen Paez, his life partner, directs the Pachamama Alliance in Ecuador and co-ordinates the Amazon Sacred Headwaters initiative.