We’ve worked closely with Rick and the Hampton Bay landscape committee in a partnership to demonstrate how a waterwise, beautiful native garden could replace water-hungry lawns in HOA common areas. Here, Rick offers some insight on that partnership and the first pilot project. 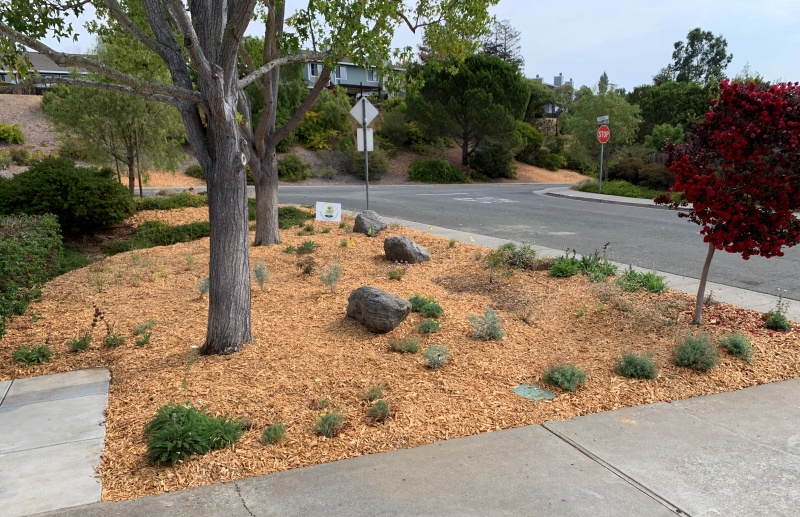 Prior to the 2016-2017 rainy season, the wettest on record, most of the state was experiencing increasingly worsening drought conditions. At one point, people were doing the odd and even dance to conserve water. Remember that? But, after the 2016-17 rainfall, most thought that we were out of the woods. Virtually the entire state was transformed. No more drought, said some! Reservoirs were refilled to capacity. A harbinger of good things to come!?

A couple of us that had been on the board of the Hampton Bay association, at that time for more than 15 years and intimately familiar with the finances, weren’t so sure about the optimistic prospects. There were other factors in play for our community that were compelling us to think otherwise. Common area landscaping was relatively vast with large swaths of grass that required a great deal of water. The plants and shrubs were aging and outdated — most installed at the community’s inception 40 years ago. Most of the irrigation was the original equipment — inefficient and high maintenance spray heads in the plant and shrub perimeter areas, as well. And, to exacerbate matters, the city was steadily increasing the water and sewer rates. So, we were having to increase association dues more than desired due to the rising costs of water and related landscape maintenance.

We knew we couldn’t sustain the path we were on and were also a bit cynical of the drought prospects, suspecting that the overabundance of rain in the 2016-17 season was a teaser by mother nature. In retrospect it was, of course, a fluke year in a worsening 20-year, some say 100-year, drought.

So, we began a campaign advocating to the other homeowners (100 units) for a complete transformation of the common area landscape and irrigation in an effort to mitigate increasing water usage costs and thereby curtailing future dues hikes. It was a challenge at first because the word “drought” was no longer front and center in the media. However, over the next one to two years as talks of the drought resurfaced, the reality we were trying to convey — steadily increasing water/sewer rates, increasing landscape and irrigation maintenance costs and, of course, dues increases — started to bear fruit.  Slowly homeowners began to jump on board.

We developed a three-phase implementation strategy over a two- to three-year period that would allow us to stagger the costs. One of the members of the landscape committee, which we had formed specifically for this broader transformation project, had prior experience with a nonprofit whose mission was to assist the residents and merchants of Solano County to conserve water by adopting sustainable landscaping methods. Prior to the beginning of Phase III (the conversion of the larger areas of grass) we met with Sustainable Solano (SuSol) and immediately realized the benefits of sustainable landscaping. We were hooked. 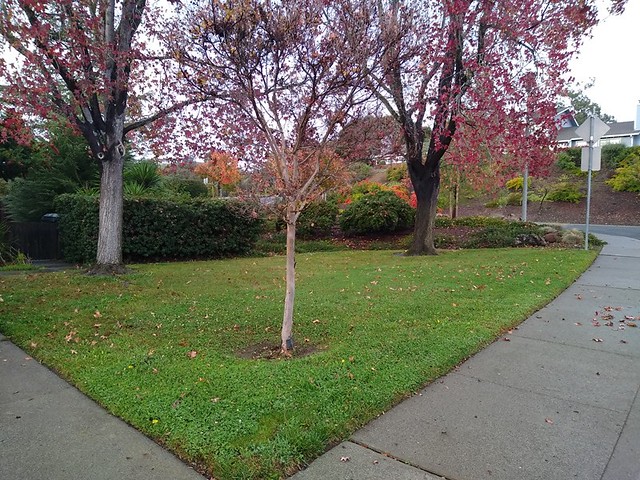 We designated a large grassy area as a pilot so that we may learn to adapt the sustainable methods to our unique environment. Michael Wedgley, the SuSol designer and soil enrichment consultant, proposed a design consisting of a variety of true California native plants, water catchment basins (swales), a basic pipe system to divert the nearby roof’s runoff to the swales and wood mulch to help retain moisture. The long-time and trusted gardener for our association implemented the design including a very efficient drip system to help the plants take root, of course.

Keep in mind that we were doing this during the pandemic and experienced several delays due to lockdowns, supply shortages, crew shortages and illness. It took longer than expected, but the end result began to garner approval from homeowners. We observed that the native plants were taking root almost immediately and within a few short weeks had noticeably grown.

In this large pilot area, with the new drip system combined with the moisture-containing properties of mulch, we calculated a water savings between 70 to 90%. Because we installed true California native plants, the theory is that within one to two years we’ll be able to turn off the drip irrigation and save 100%. It will definitely pay for itself over the long term. We’re looking forward to converting the remaining large grassy areas in our community.

You can learn more about the partnership with Hampton Bay HOA here, including information about building healthy soil and garden designs. 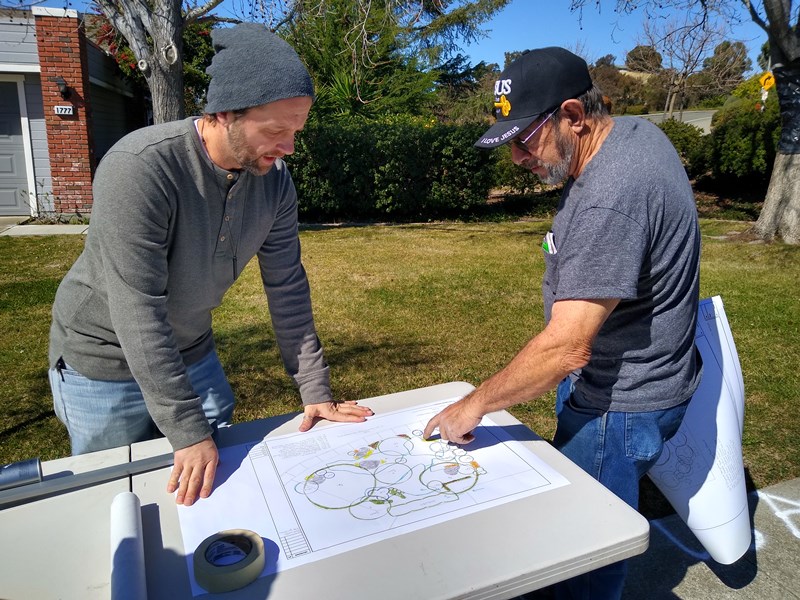 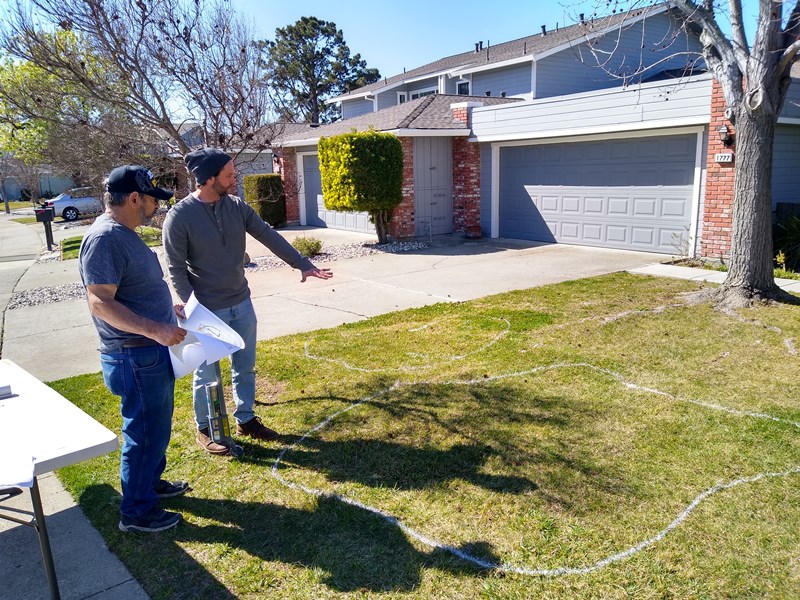 After finalizing the designs for the two pilot sites with the HOA, Permaculture Designer Michael Wedgley and landscaper Jerry Saitta met at the site to talk over the designs. Both sites will replace the grass with sustainable, low-maintenance, waterwise landscaping that captures rainwater and incorporates native plants.

At the larger site, Michael marked the location of the swales — in-ground trenches that will capture rainwater and roofwater from the nearby building so that the water can sink into the ground, build healthy soil and provide on-site water for the plants. The smaller pilot site will also have a swale that captures roofwater.

Jerry and Michael discussed digging the swales, plant spacing and other aspects of the project. The next step will be to begin the installation. 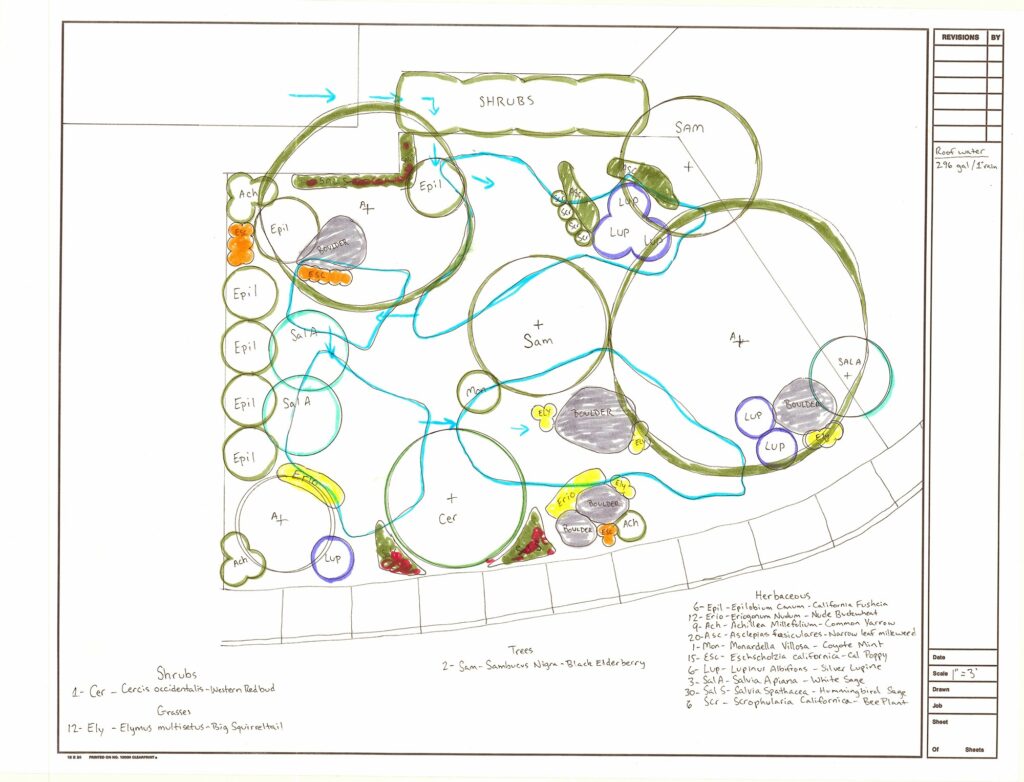 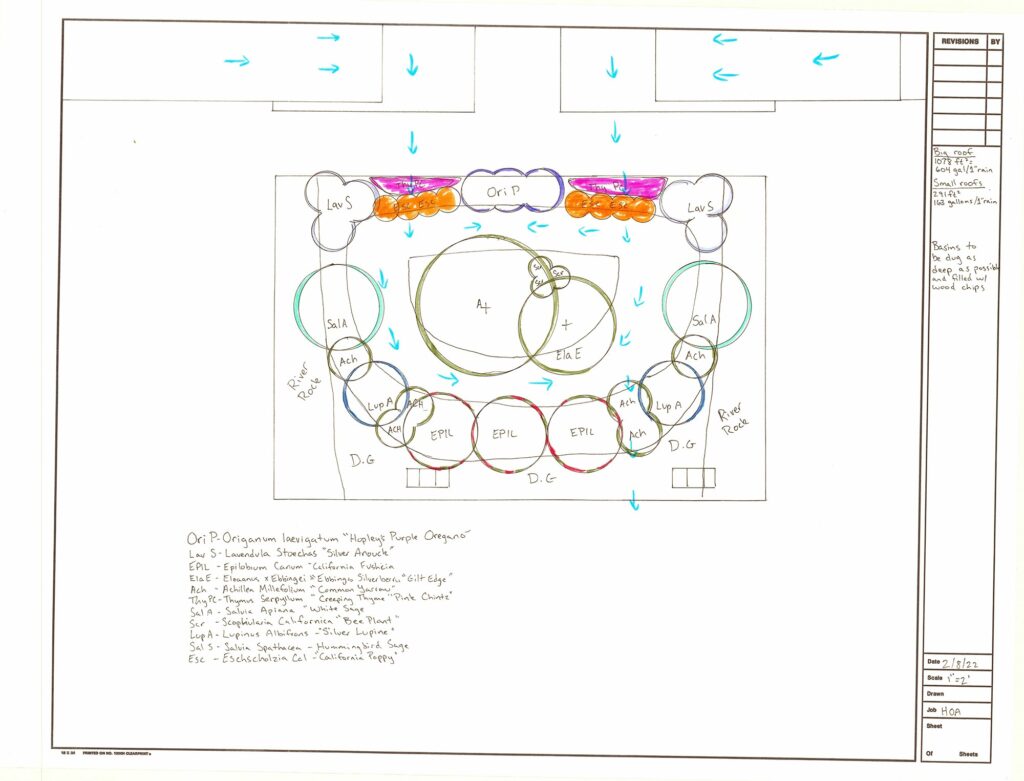 The town hall with HOA members on Dec. 4 was a great opportunity for Permaculture Designer Michael Wedgley to share the proposed designs for the two pilot sites that will replace the grass with sustainable, low-maintenance, waterwise landscaping that captures rainwater and incorporates beautiful native plants and shrubs.

Hampton Bay HOA has been incorporating sustainable practices at the property, including ending the use of chemical herbicides like glyphosate several years ago and using wood chip mulch on the hillsides.

Michael highlighted how the designs for the larger site and the smaller mailbox site will look to nature as a guide, as opposed to common approaches to landscaping that have relied on indiscriminate water usage, chemical fertilizers and pesticides, and “mow and blow” maintenance. Read his talking points from the presentation here and watch the video below.

Here are some highlights:

The hope is that these concepts from the two pilot sites will provide ideas that can be incorporated in later phases that will replace large lawn areas in the HOA. This will make Hampton Bay HOA a model for how other HOAs could do landscaping and conserve water. 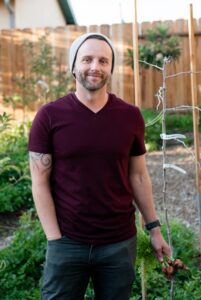 Michael Wedgley is creating the designs for both of the pilot sites at Hampton Bay HOA, and will be working with the HOA’s landscaping company to coordinate the installation of the designs. Michael will also build the soil biology of the sites to create healthier, more lush environments in which the plants can thrive.

Michael is a Bay Area native and a Permaculture Designer who specializes in edible and native landscapes, as well as applied microbiology for the elimination of pesticides and fertilizers. He is a certified Soil Foodweb Lab Technician assessing the microbiome of soils to help growers and gardeners understand the biological needs of their soil, and operates under the business name Soilogical BioSolutions and Designs.

He also is the founder of the nonprofit organization Transformative Soil and Landscapes, which operates primarily in Contra Costa County and organizes the community around installing regenerative food forests in people’s yards and in community gardens. His love for nature and food are often brought together in residential homes to help people design their landscapes into foodscapes that provide the best quality food available while integrating rainwater catchment, aesthetics, nature, and biology.

The photos in the slideshow below reflect how Michael’s design work and focus on healthy soil can create a thriving ecosystem in a garden design that attracts and celebrates pollinators. (Photos of this garden in Martinez provided courtesy of Gina Casey of GMC Photography and Video) 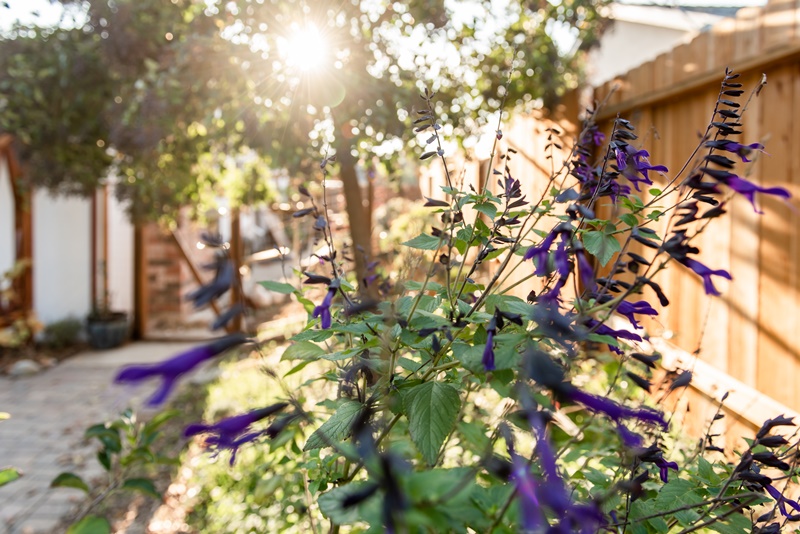 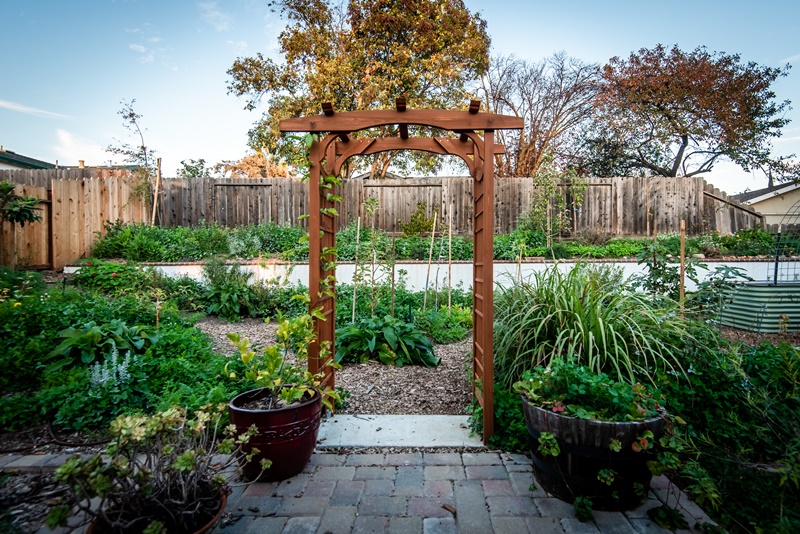 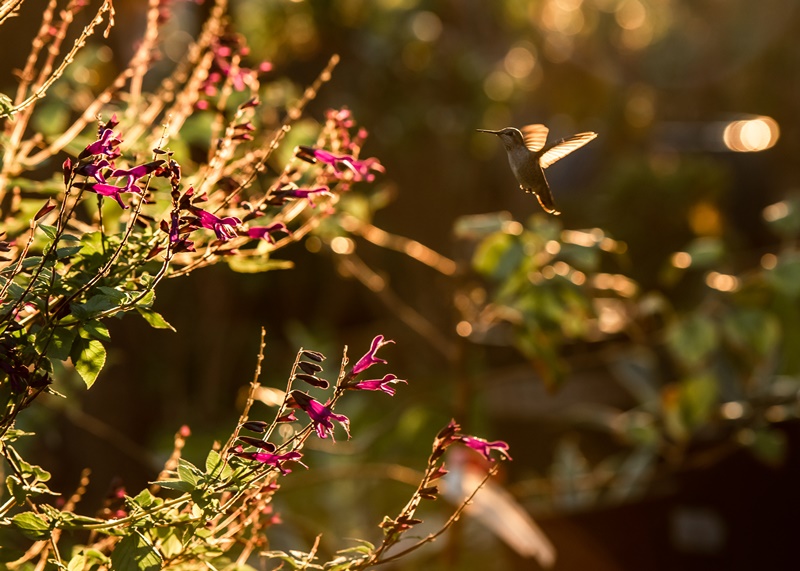 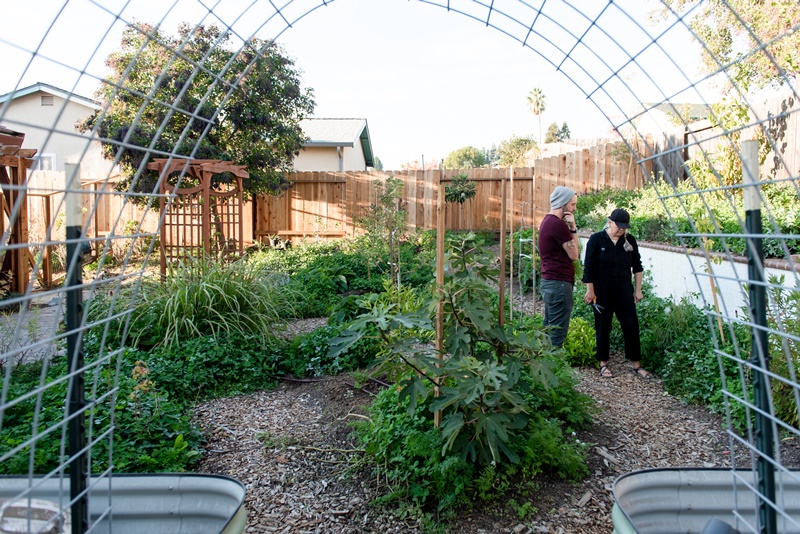 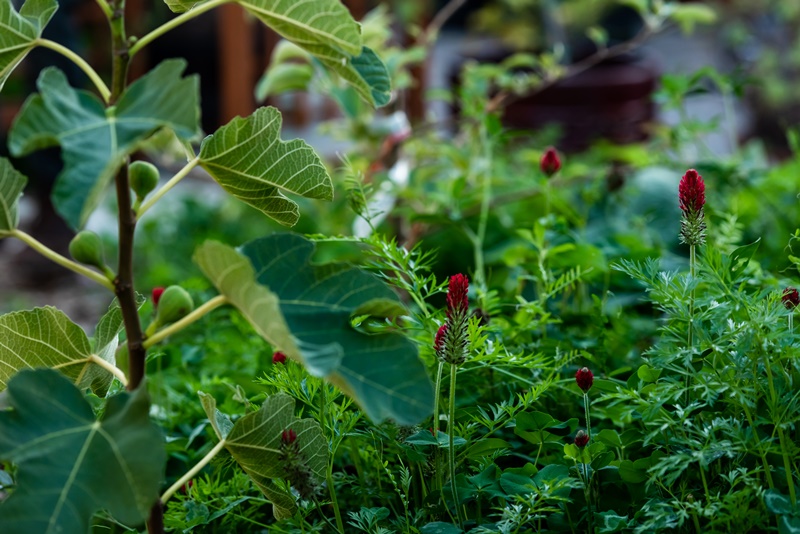 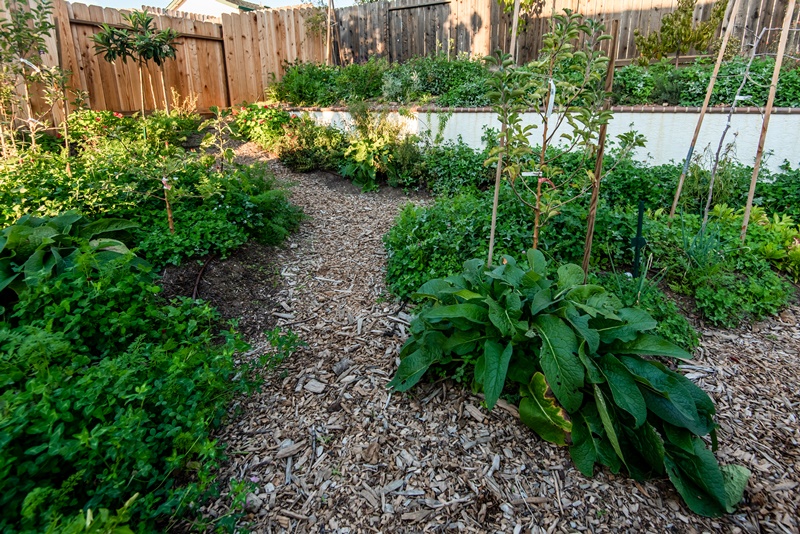 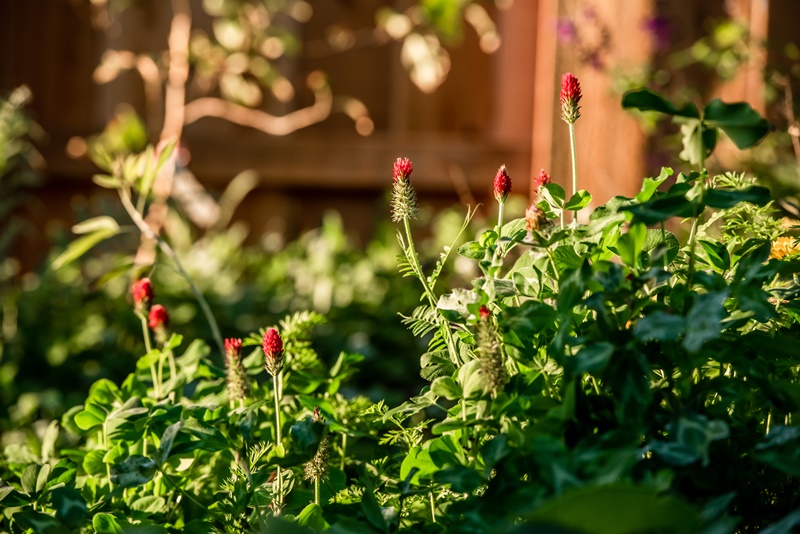 Explore different sustainable garden landscapes by scrolling through the photos below. While some of these focus more on edible landscaping, a sustainable approach can be use to create a variety of landscapes, including beautiful pollinator habitat as planned for Hampton Bay HOA’s pilot sites. 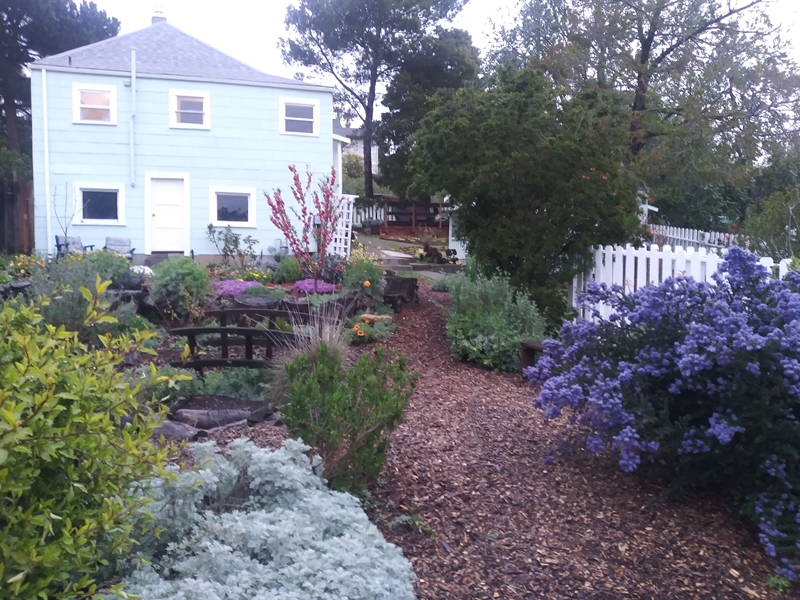 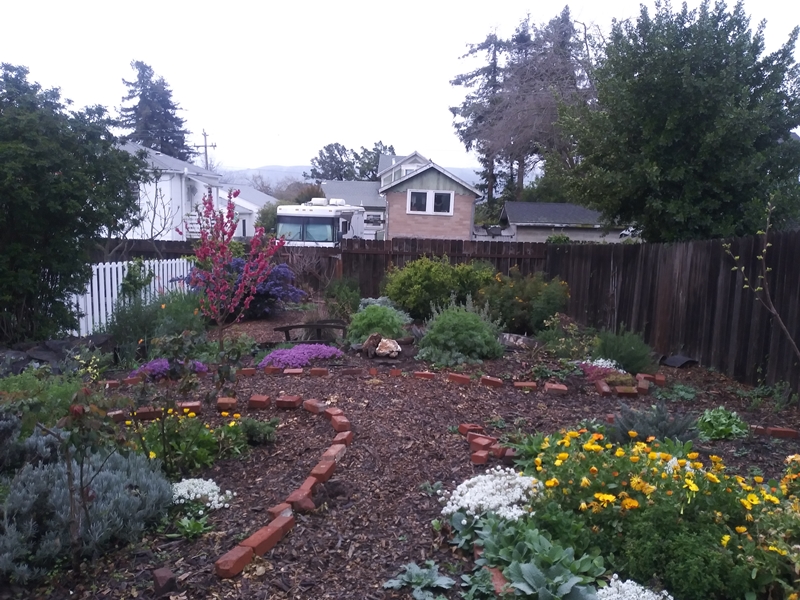 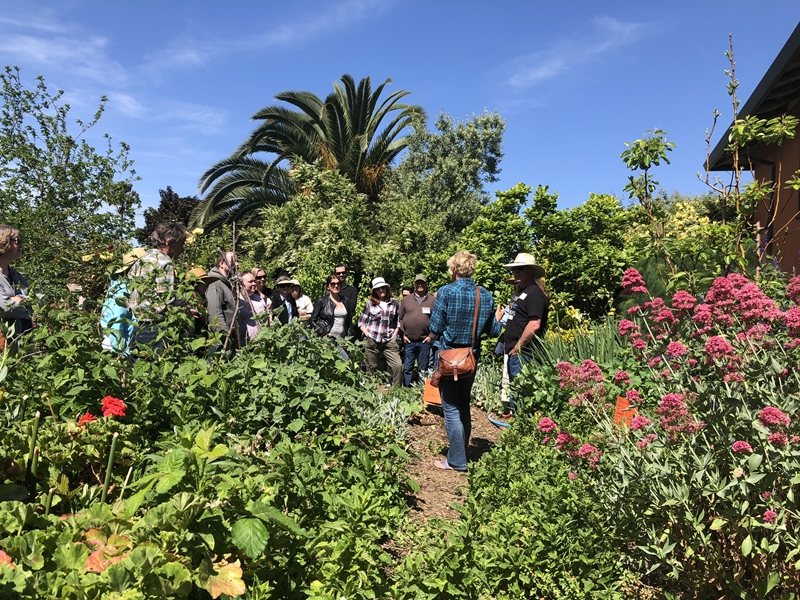 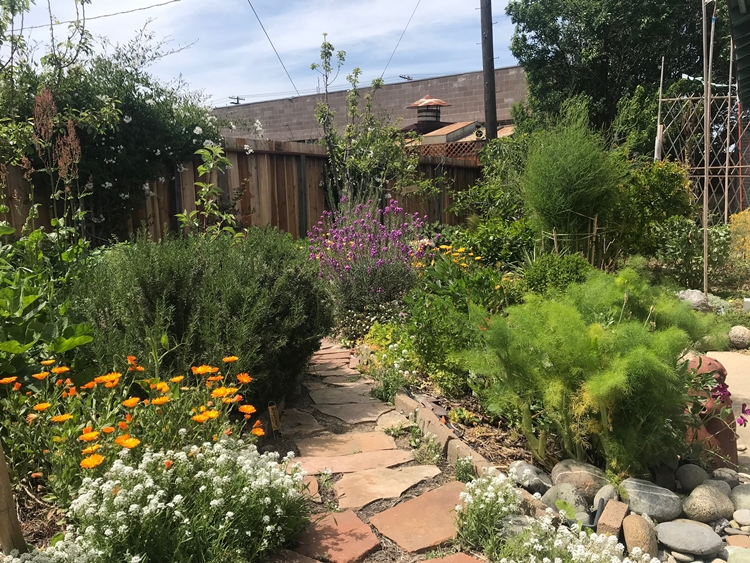 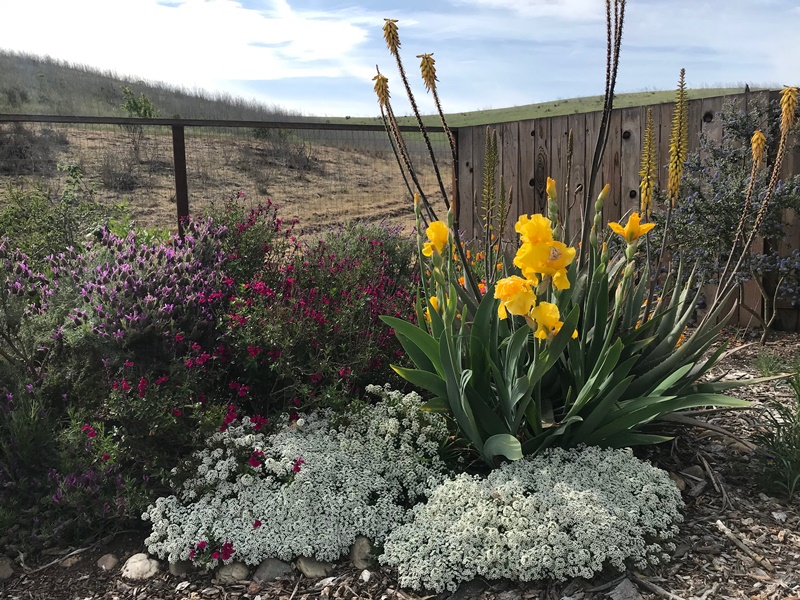 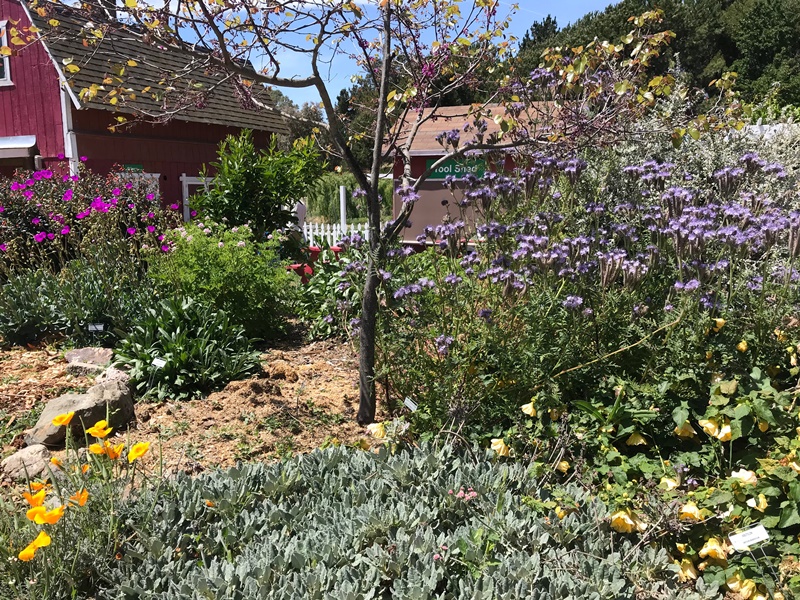 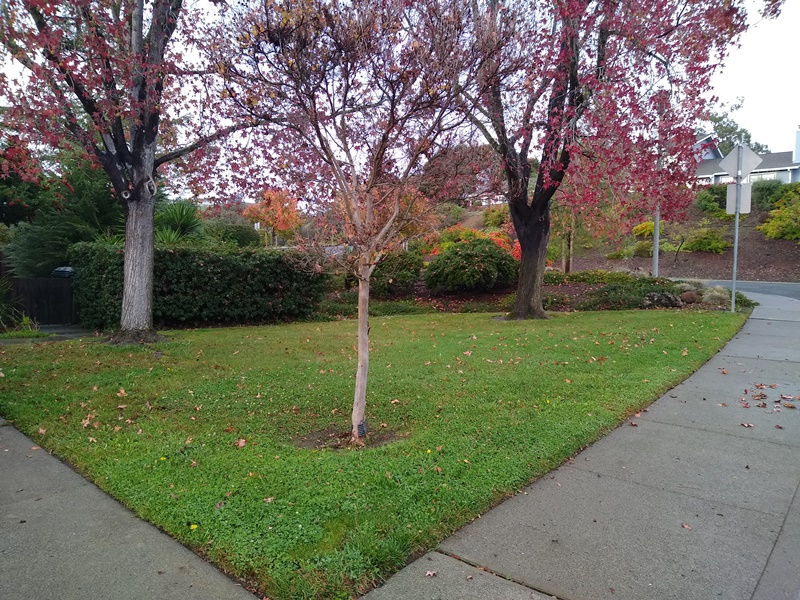 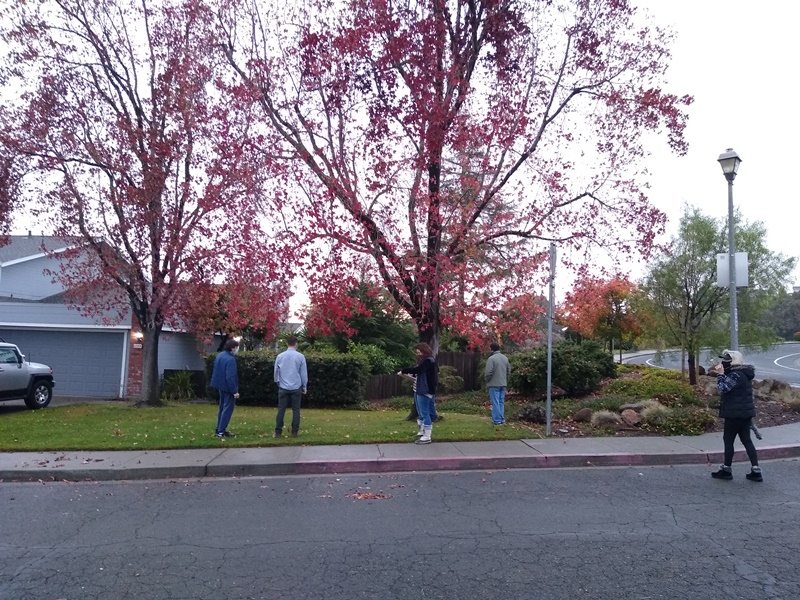 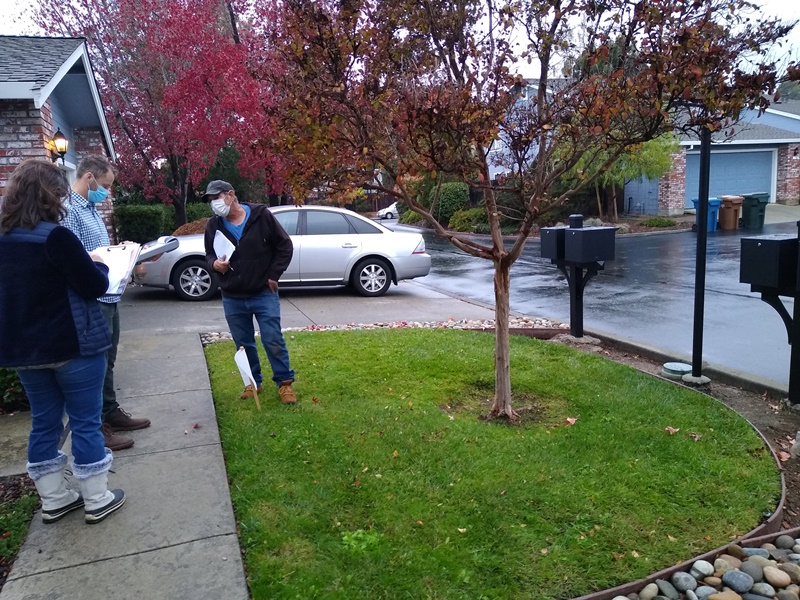 This site assessment visit was an opportunity for the Hampton Bay landscaping committee and landscaper Jerry Saitta to meet with designer Michael Wedgley and observe the two sites selected for the pilot projects.

This meeting was the precursor to the initial design and a good way to determine the desires of the HOA members and the needs of the site for swales, plant selection, etc.

The visit involved touring the property, learning about the HOA’s phase 1 landscaping changes and the process for phase 2. Some time was spent examining downspouts to gauge the possibility of capturing rainwater to feed into swales (in-ground trenches that capture and sink rainwater), and discussing some possible plants and design elements.

The next step will be a town hall meeting on Dec. 4 to go over the initial plan and talk about the benefits of this approach to landscaping.