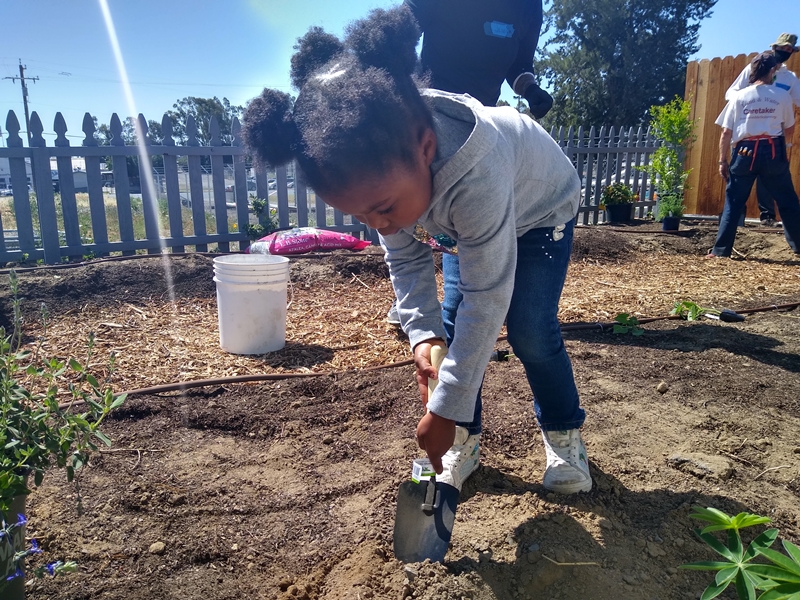 In the beginning it was magic, so many synchronistic moments. In January we began our first Permaculture Design Certificate course (PDC) in Solano County. That same month, Habitat for Humanity reached out to partner with us to design and lead a demonstration food forest installation at the newly built veterans home in Rio Vista. The students attending the PDC had to select a design project and three of the students were interested in the possibility of designing a garden for the veterans.

PDC students John Davenport, Katie Rivera and Susan Worden selected the site as their design project and became a design team. Katie and Susan are both Rio Vista residents; John and Katie are both veterans. John is the owner of Cali Ground Troops and became the lead contractor for the project. We all felt the magic and took this project on without hesitation. At the time, none of us were aware of the level of commitment and work that it would take to see the PDC project manifest into reality!

The design team worked diligently and put thoughtful energy into a design that included the residents’ input. During a design interview, one of the veterans named the garden “Serenity.” The design includes a space in the backyard for outdoor gatherings so they can barbecue together; plants selected to increase biodiversity and provide food; a hedge that will provide privacy and attract pollinators and an area in the back for growing annual vegetables. The hope is that the garden becomes a place to heal.

Getting Creative with Funds

Typically, our demonstration food forest sites are 1,200-2,000 square feet and take three public, educational workshops to install. This site was 5,800 square feet and it took five public workdays in addition to many other visits to prepare the site and work in smaller groups. We definitely had to get creative to stretch our funds! We worked closely with Mark from Habitat for Humanity to make it happen. Mark wears two hats, he is project manager for Solano Napa Habitat for Humanity and he also works for the Home Depot Foundation. Habitat for Humanity graciously gave us access to tools that were already on-site and helped with their expertise in irrigation. The Home Depot Foundation donated funds to help support the cost of irrigation and for part of the contractor fees. We worked as a team to find enough funds to complete the project. 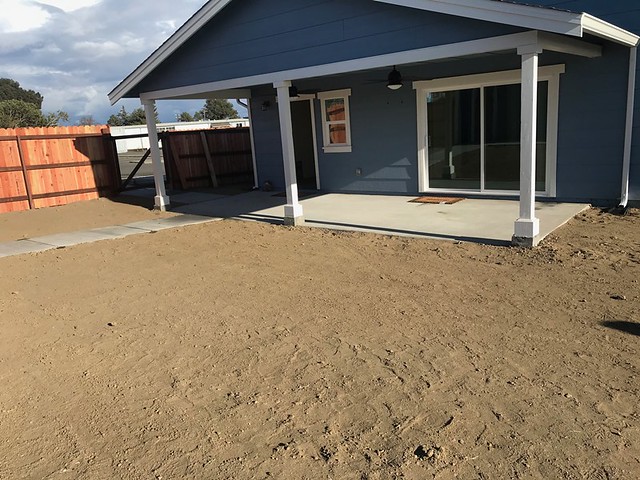 During the installation we were made aware that spring is Rio Vista’s windy season. Every installation day was filled with so much wind that it felt like our thoughts were being taken out of our heads and thrown around in the air and brought back as jumbled fragments. The site was basically sand. The “sandy soil” was in desperate need of organic matter so we brought in 40 yards of compost and horse manure. We attempted to dig the compost in on a windy day in April and quickly realized that machinery was necessary. We reached out to the designer of our first seven demonstration food forest gardens, David Mudge. He has an excavator named Sunflower. David and Sunflower spent a very long day in mid-April mixing in the organic material. The thought was to bring in enough organic material to turn this sand into a foundation that could successfully grow thriving trees and plants.

During the five public installation days, 52 people from the community came to learn about permaculture, support the veterans home, and to help install the demonstration food forest garden. Susan, Katie, Kevin, Nikita, Jaxon and Maxfield were loyal volunteers that were committed and diligently showed up during this challenging installation. To honor and support this project, Senior Airman KeShay Solomon from Travis Air Force Base reached out to her squad and four members volunteered time to help us plant the garden. Read more about that day in this Daily Republic article.

Reggie and Cara from BFHP worked with us to coordinate days and helped to install the garden. BFHP will be hiring one of the designers, Katie, to guide the residents in maintaining and caring for the newly emerging plant life so they all continue to thrive.

Gratitude for the many sweet community members that volunteered their time and the simplicity of the Serenity Prayer kept me centered during the installation.

This project and the Solano Sustainable Backyards Program are generously funded by the Solano County Water Agency and in partnership with the organizations mentioned above. 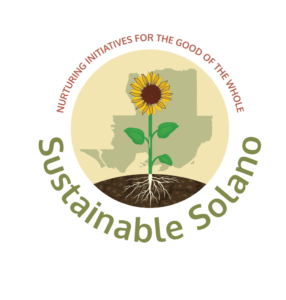